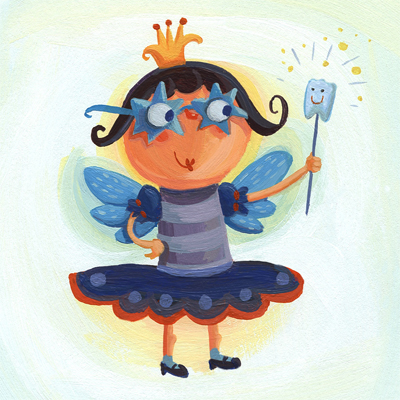 According to a website that has compiled a list of such things, tomorrow is National Tooth Fairy Day.   Maybe your house hasn’t had a visit from the tooth fairy.  Maybe you’re still at the first tooth or 2-year molars stage (Hang in there! It gets better.).   If your child has lost a tooth, did the tooth fairy visit?  What did she leave?  Did you start a special ritual with a tooth pillow or box?  Did your child write the tooth fairy a note?

When I became a parent, I knew that there would be decisions to make about diapers, bottles or no bottles, choice of pediatrician, choosing activities–like Kindermusik, and eventually choices about elementary school.  I didn’t know there were so many different ways to “do” the Tooth Fairy thing.  Once my son started elementary school, it seemed there were as many Tooth Fairy traditions as there were colors of crayons.  Some children left their tooth in a special pillow or box under their pillows.  Another child claimed that you had to leave your window open a crack or the fairy wouldn’t be able to get in.  A few wrote letters asking the Tooth Fairy to draw a picture of herself or to reply in a note.  The one thing all the kids could agree on was that the Tooth Fairy left cash.  Cold. Hard. Cash.  Not a quarter, mind you.  Bills.  The going rate for teeth in our elementary school seemed to be $1 to $20*.  Luckily, our Tooth Fairy decisions fell in line with those of my son’s peers.  We were right in the middle of the tooth fairy spectrum.

*The $20 for a tooth story is actually pretty amusing.  After hearing from a kiddo that the tooth fairy left him $20 for one tooth, I will admit, I couldn’t decide if the kid or his parents were crazy.  Later, I found out the scoop.  The family had gone camping and the little guy lost his first tooth.  Stuck in the middle of nowhere, hours from an ATM, Mom and Dad weighed their options. A note from the fairy saying she would visit once the family was home? Not for the first tooth.  That wouldn’t do.  So, Dad checked his wallet and found only $20 bills.   Dad was quick to add that the Tooth Fairy left a note saying that this was an extra special tooth, highly valuable and rare.  Most teeth wouldn’t be worth $20.  The lesson in this story: Always have a stash of tooth fairy cash.

A quick search of the internet will yield thousands of ideas on ways to make the Tooth Fairy’s visit memorable beyond the $1 under the pillow.  There are tips for adding glitter to the money (fairy dust), printable certificates, and even websites devoted to her visit that range from “super girly fairy focused” sites to “this is what happens when you don’t brush and floss” sites.

In this time of Google searches and Pinterest, is the Tooth Fairy of today different from when you were a child?  Beyond making sure you have small bills around to prepare, what do you do to celebrate the arrival of the Tooth Fairy?